When you play at Bovada, you’re playing at not only the busiest poker room by far that still serves U.S. players, but one of the biggest poker rooms in the world period. All this traffic has many benefits, and one of them is gaining access to some very big and exciting poker tournaments.

In terms of the numbers, Bovada delivers a total of $2 million worth of guaranteed tournaments every week. With this much to give away, this is not just a matter of a few big ones, with the rest being on the small side, like you see at some competitive poker sites.

There are no less than 12 tournaments that run every day that have a guaranteed prize pool of $5000 or more. These bigger tournaments run throughout the afternoon and evening hours, with most of them scheduled in prime time, to ensure that everyone gets plenty of opportunity to enjoy all the fun they bring.

There’s also another $55 buy in that runs at 9:15, and this one only offers a guaranteed prize pool of $15,000, but that’s still a mighty nice chunk of change to be playing for.

There are also big tournaments that run at other times of day here as well, but for those who like to play in the evenings, and want to play for big money and big excitement, Bovada packs every night with lots of action for you.

Sunday is big tournament day in the world of online poker, and there are some that only offer smaller so called big tournaments, and may not even offer then every week, and perhaps even just once a month.

Who wants to wait a whole month in between these tournaments, or play for a whole lot less cash, like you see at Bovada’s competitors? You’re at the big site here, and they roll out the real big one every Sunday at 4 PM ET.

There are a number of ways to get a seat at this huge tournament. You can just buy in directly for $162, which is the simplest and easiest way if you have the funds to do it. You can also redeem your points for a seat if you have enough of them racked up to do it.

There are also a number of qualifiers that you can buy into, starting at $1. Of course, the bigger the buy in at the qualifier tournament, the better chances you’ll have, and you do want to do your best to make it to this tournament because the money you can win is so exciting.

For those who haven’t played at a tournament this big before, let me tell you, the game is a whole lot more fun with this much money on the line.

With such a great lineup of big tournaments, there’s no limit on the fun you can have playing here. 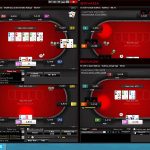 © 2020 Bonus Codes For Bovada Casino, Poker and SportsBook.
Bovada is the largest online gambling site for players from the USA. We are here to bring you the best Bovada Bonus Code to increase your bankroll before gambling online from the USA. If you have a gambling problem please seek help.